Finally, something in the news worth reading — YOUR mobile app launch announcement.

You've released your app. Now what?

It's a wakeup call to many developers, but getting your app designed, coded, and tested was the EASY part. Making sure your app gets noticed at launch is a much tougher hill to climb.

Get your mobile app some recognition.

Our job is to help with this next step. We work to understand your app's unique design and advantages right away. That allows us to craft a press release launch that gets journalists' and bloggers' attention and gets your app the reviews, articles, and writeups it deserves.

Start by sending us everything you can think of: demo videos, app description, key features and highlights, and especially the 'behind-the-scenes' info. The best press release announcements are really modern works of storytelling, so help us tell your tale by answering these questions: Whether or not you request our help in pushing your app description to the next level, here are the fundamentals we keep in mind every time.

We'll explore all the material you can send about your iOS or Android app, including your website and quotes from your team or customers. You'll receive a draft of the press release for your approval in just 1-2 days, and we'll continue honing the mobile app launch announcement with you until it sounds just right. In addition to the press release, we'll write a query email that you can use to send personally to journalists and bloggers you think might be interested in your app.

Tip: Be sure to send the press release personally to journalists and bloggers who have previously reviewed similar apps on websites like AppAdvice or TouchArcade.

We offer Extended Distribution via PRMac.com. There are a number of other trusted media distribution outlets you can try yourself, including: PRWeb and PR Distribution. There are other sites too, but make sure you are looking for quality of leads, not quantity.

As a professional localization team, we can also help you get your press release message in as many languages as your audience speaks. Experimenting with press releases in multiple languages will help you reach many more bloggers — but usually they will expect the app to be localized too. Of course we can handle that as well!

Founded in 2004, Babble-on provides high-quality language services to software developers and civilians alike. In the past, developers were left with two unsatisfactory options: cheap, low-quality writers for hire or big businesses that charge by the second. Babble-on hits the "sweet spot" with the absolute highest quality writing at honest and reasonable costs. It's a one-stop-shop to write, translate, and distribute a press release for your mobile app. 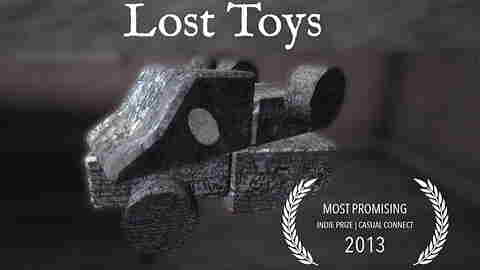 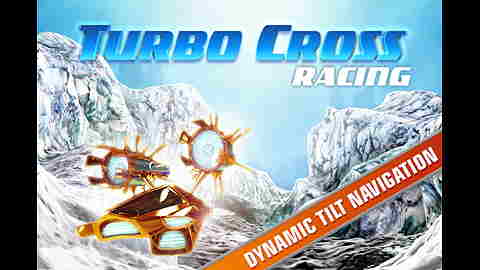 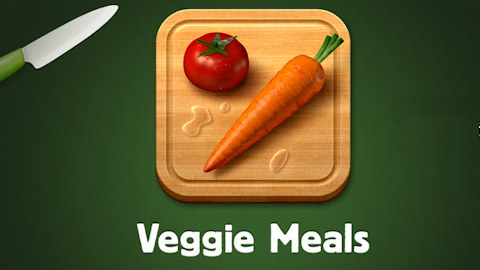 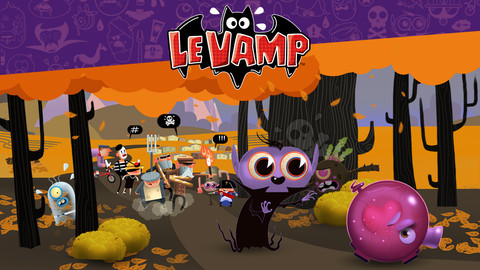 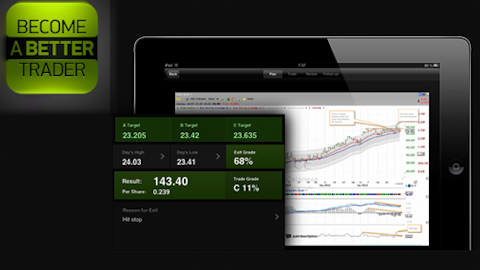 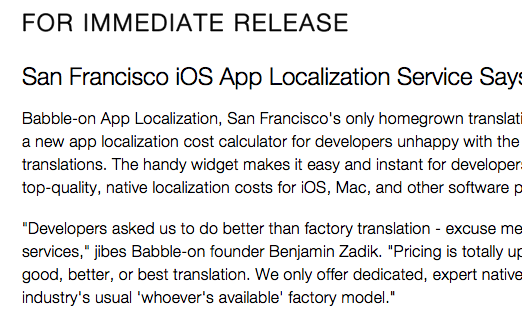 “Developers asked us to do better than factory translation – excuse me, ‘cloud translation’ services,” jibes Babble-on founder Benjamin Zadik. “Pricing is totally upfront; there are no tiers of good, better, or best translation. We only offer dedicated, expert native translators, not the industry’s usual ‘whoever’s available’ factory model.”

Adds Benjamin, “We can automate without becoming automatons.”

Developers simply drag files onto the widget to count the number of words and strings inside a myriad of localization formats – even hard-to-count files like iOS .strings, Java .properties, and Android .xml. Then they can play with language options to see which international markets they can afford now, and which they should wait to internationalize later.

Mobile apps are already a multi-billion-dollar industry, with the most growth coming from outside North America. Apple itself is looking to China as an “unlimited” opportunity, while Korea and Japan have tempted developers for demonstrating that customers there will pay for apps – especially localized ones.

“Take a look at the Top-10 apps in any App Store in Asia or elsewhere and nine of them are localized,” Benjamin points out. “That means either that the best apps get localized, or, as we’re hearing from developers, only localized apps are gaining significant traction.”

While all developers understand the need for apps to go global, deciding which languages and markets to focus on can be as mystifying and undecipherable as the foreign languages themselves. Babble-on set out to make it easy by offering one-on-one advice about how to choose, and letting developers add or subtract languages to meet or beat their budget.

“Unlike a factory, we help you decide based on your app, your user base, and years of experience in the industry,” says Benjamin. “We’re not magicians or fortune tellers, but we can help guide you better than the wisest widget.”

The app localization cost estimator is free and available from Babble-on’s website. There is also a helpful step-by-step iPhone localization tutorial for developers localizing apps for the first time. It explains in detail how to extract hard-coded strings into Apple’s .strings localization format for seamless internationalization on iPhone, iPad, and Mac OS X.

Babble-on App Localization was founded in 2004 in San Francisco at a time when apps were still called software. It grew rapidly from a two-person, bilingual translation team to a team of 80+ native translators who work collectively on large multilingual projects in dozens of languages. Setting it apart from ‘cloud localization services’ is the fact that all translators work in their native language only, specialize in localization, and are all-around good human beings that use actual iPhones and screenshots for context. Even more revolutionary, the project manager is also a translator, and available to speak directly with the developer at all times – in several languages, if necessary. Copyright (C) 2018 Babble-on App Localization. All Rights Reserved. Apple, the Apple logo, iPhone, iPod, iPad and Mac OS X are registered trademarks of Apple Inc. in the U.S. and/or other countries.